Indie music all started as a reaction against, what they saw, as the formulaic music of the 70s and 80s.

This mentality pushed many of the songwriters we’ll talk about away from the familiar progressions of Pop, Blues, and Rock of the time.

A lot of that music centered around a very set pattern of using I-IV-V progressions in some combination.

Some of these sounds came from early rock and punk innovators like The Velvet Underground and The Sex Pistols, while some found inspiration from Jazz and Folk music.

The Chords & Progressions Of Indie/Alternative Music

Indie music can be seen as a blend of pop, punk, and rock.

To get this sound you need to start making chord progressions that don’t rely solely on the I, IV, or V chords as is common in blues and lots of rock music.

To do this, it’s important to understand some basics of key signatures of musical harmony. Let’s briefly break down the G major key:

These chords are created by putting a major third and perfect 5th on top of the root note (G, C, or D). All of these notes come from the major scale we broke down, which follows the formula of whole steps and half steps: W – W – H – W – W – W – H.

What Indie music often does is use chords based off the ii (Am in the case of G major), the iii (Bm), or vi (Em). They’ll also use chords that are not perfectly in the key of G major either like the A major chord or B major chord, for example.

Adding onto all of this is the use of chord shapes other than barre chords and basic chord shapes so they can use other combinations of intervals. Unfortunately there’s no set method of going about doing this as it depends on the context of the chord progression, the key, and the actual shapes being used. However we’ll go over many instances in detail throughout the rest of this article.

Our first progression is from “I Bet You Look Good On The Dancefloor” in F# Minor, by the Arctic Monkeys:

The lowercase roman numerals denote minor harmonies, though the song is using power chords. This is an important thing to understand with indie music and rock music as the minor chords will often give a sound you don’t want.

To understand how these chords fit into this key, let’s break down the key signature:

So like we said in the previous section, many chord progressions are looking to find sounds other than the typical combinations of I, IV, and V. This one is implying minor chords and throwing in the III chord, which is used quite a bit in rock music, particularly grunge.

It’s okay to use i, iv, and V! The problem is that you’re going to sound like pop, reggae, early rock n roll, or something brighter than you may want with Indie. So experiment with these chords and see what works for you.

Before we break this one down, take note of the amount of bars we’re using here and in the previous song. You’ll see only 4 bars here and 2 before. This is not by accident!

When writing indie chord progressions, or any rock music really, it’s a better idea to create riffs and progressions that are shorter. Many R&B, Blues, and Country progressions will go up to 12 bars or more, but that’s not an aspect of this music.

But you also saw me mention that this progression is in A Lydian. That’s because the chords all belong to the key of E major, and the progression starts on A major. This is all there is to using modes! To use any mode, just pick the key and start on a different chord than the root, which is E in this case.

Here’s another breakdown in case you don’t understand:

This chord progression is from “Sweet Disposition” by Temper Trap in D Major:

In Indie music there’s a lot of influence from pop music, which uses sus chords and harmonies like ii, iii, and vi with the I, IV, and V chords. You’ll notice that many of the other progressions we’ll use stay very close to the boundaries of the key signature.

What I mean by “boundaries” is that they don’t go out of key. These songwriters aren’t using any chromaticism or modal mixture. There’s nothing wrong with that at all! It’s just a feature of this type of music.

The influence from pop music comes from the maj7 chord and the sus4 chord. Using these intervals will always give a poppier jazz-like sound. Here’s the breakdown again to understand how these chords go together:

This chord progression comes from Song 2 by Blur and it’s in F minor:

Here again you’ll see the use of the III chord in the context of a minor key. This is a great tool to use when creating rock chord progressions because it magnifies the minor 3rd interval relationship between the root and third note of the scale. If you know the pentatonic scale well, you’ll understand why this is so powerful.

The VII harmony is also a great tool too. The VI and the VII appear naturally in every minor key and it’s why it appears in so many riffs based around the minor pentatonic scale. To see why let’s break this down too:

Take a moment and see how every chord except C5 fit perfectly in the F minor scale. This right here is a secret to creating lots of minor pentatonic riffs, and why you’ll see the VII and III used so often!

This progression is from “Take Me Out” by Franz Ferdinand in E minor:

You can argue that this progression could be in E major, but that’s the confusing thing about more blues based riffs and songs. This is a straight up i-iv-v progression played in power chords, and lots of blues music uses this harmony and plays it “neutral” without thirds.

Even though I’ve stressed how much the genre stays away from the blues and uses pop and major keys it will still use this sort of harmony.

This is Coldplay’s “Yellow” in B Major:

Once again we have more usage of the I, IV, and V chords but in a major context this time. Notice also that many elements of what we’ve seen before are in play here as well.

You’ll see suspended intervals with the 6 and 11, as well as another maj7 chord. These are important elements and you’ve just seen them again so start using them.

Finally, you’ll see that this progression is a little longer at 8 bars but is using only 4 chords total.

This is “I Am One” by The Smashing Pumpkins in F# Minor:

What’s important to remember with all of these progressions is that harmony isn’t everything. There’s the melody being sung over it, the rhythm and beats being used to play the chords, and the arrangement of the other instruments too. However this is an article about guitar progressions so we can only talk about a few things here.

This progression is another iteration of the III harmony, which we discussed earlier in Song 2 and the Arctic Monkey’s song. I was not joking at all that this harmony is a great tool in your songwriting arsenal.

This progression comes from “Sex On Fire” by Kings Of Leon and it’s also in E major:

One thing you may be thinking is “Why are so many progressions in E major?” That’s because of the fretboard and the easy accessibility of chords like E and A. It’s also because of the Indie genre’s tendency to involve more pop influence like we’ve talked about before.

The Amaj9 and the C#m7 are not used much in rock music, but it works great here! Jazz chords can work great in a context like this one because we’re sticking to some fundamentals like avoiding too much I-IV-V and using other possible harmonies like vi7.

To get a better idea of what chords are available, let’s do a break down where I show some of the jazz chords available in E major:

Some of these are easier to use than others. Some will not give a great rock sound unless you find a suitable voicing. However there are great rewards from working with using these chords.

This progression is from “Where Is My Mind?” by The Pixies in E major.

By now you should see that a great way to create an indie sound is to use E major. So many of the songs we’ve used here are in that key, and you’re equipped with many ways to write a chord progression that makes something a little different.

One thing to recognize with these chord progressions is that many of them don’t end on a V chord harmony. This is another one of the most typical chord moves/sounds in all music. However you’ve got many examples of how easy it is to avoid the ear’s tendency to go to this chord before starting over.

The final chord progression is “Don’t Want To Know If You Are Lonely” by Husker Du in E minor:

There’s not much to add to this one except to remind you of the many aspects of this genre we’ve been talking about. This chord progression is using only 4 bars, the III chord is here again, and there’s no set pattern of just I, IV, and V.

This riff is using both power chords and open chords, which is a great tool to use as well since we tend to think of using only one or the other. Try this in other keys as well and you’ll be surprised what kind of great sounds you can come up.

GuitarBased.com is all about showing you a little bit more about guitars each day and finding ways to innovate and have fun with this beautiful instrument that we love.

If you enjoyed this post, I invite you to check out our blog!

We’re always sharing a lot of useful and helpful content that both beginners and advanced players can use to further develop their playing abilities.

As always, thank you for reading and being here! 🤘 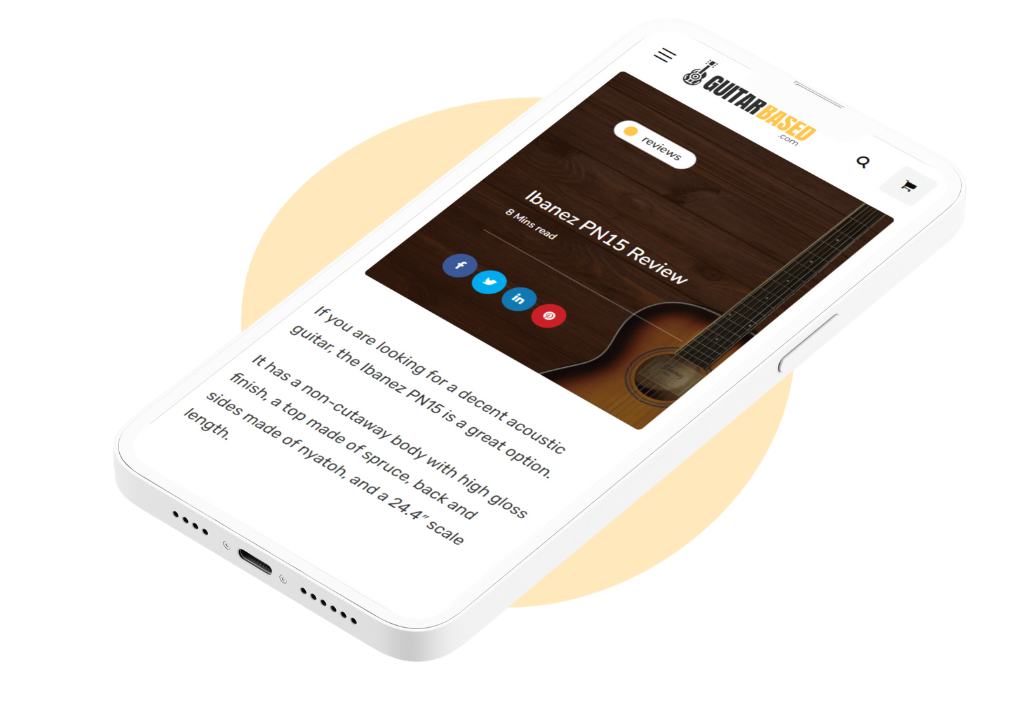 Join 1,000+ guitarists who are already subscribed and begin receiving:

Loves studying classical piano, youtube video tabs, and music theory textbooks to get insights into guitar playing that no one else has uncovered yet. In his spare time, he can be found relaxing at the beach in San Diego, or adventuring somewhere around the world.
Articles

12 Mins read
If you’re new to busking or just looking for some inspiration, it can be tough to decide what songs to play. With…
Blog

8 Mins read
Many people ask themselves whether scalloped necks are any good or not. The answer might vary from person to person, but in…
Blog

11 Mins read
Music has always been an important part of Japanese culture, and the country has a long history of instrument making, especially guitars….